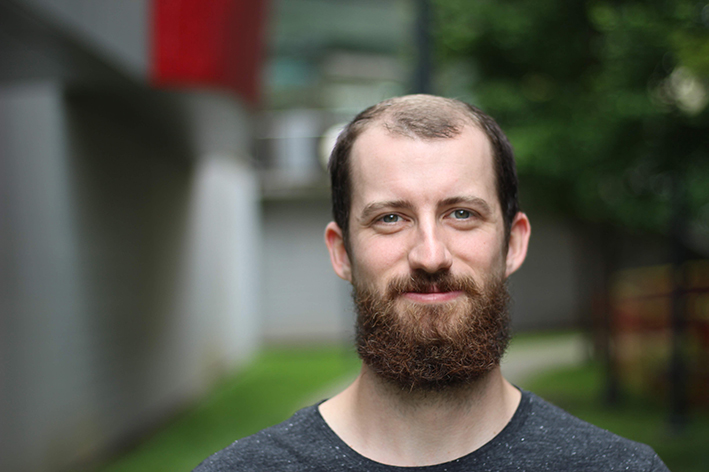 Sky is the limit, literally, for graduate student Sanna Masud, who plans to become an astronaut.

Here on earth, Masud, a fourth year PhD student in the Donnelly Centre for Cellular and Biomolecular Research, studies gene interactions in Barth syndrome, a rare genetic disorder that weakens the heart muscle and can be lethal. Her know-how of rapidly evolving genomic technologies will come in handy when she eventually applies to the Canadian Space Agency, which is increasingly seeking life scientists to shed light on how space environment affects the genome before humans can be sent on longer missions.

Along with Nil Sahin and Benjamin Kingston, Masud is a winner of the 2020 Jennifer Dorrington Graduate Research Award, awarded annually to three outstanding PhD candidates in U of T’s Faculty of Medicine who are doing research in the Donnelly Centre.

The award was established in honor or Jennifer Dorrington, who was a professor in U of T’s Banting and Best Department of Medical Research, where she carried out pioneering work on ovarian physiology.

Read about the Dorrington family visit to the Donnelly Centre

“The 2020 Dorrington awardees reflect the wide scope of cutting-edge research projects in the Centre,” says Gary Bader, a professor of molecular genetics and computer science and Chair of the award committee, whose members are U of T Professors and Centre’s investigators: Liliana Attisano, Henry Krause and Fritz Roth.

“Our 2020 winners are doing some of the most innovative research in biology that has already revealed important new insights and has the potential to improve patient lives,” says Bader.

“Our 2020 winners are doing some of the most innovative research in biology that has already revealed important new insights and has the potential to improve patient lives” – Professor Gary Bader, Dorrington Award Committee Chair SANNA MASUDMasud is co-supervised by Charlie Boone and Jason Moffat, both professors of molecular genetics at the Centre.

“Both Charlie and Jason are so passionate about the science,” says Masud.” “For a graduate student, it’s great having supervisors who can talk for hours about a million ideas around the project and be just as excited about it as they were on day one.

With their guidance, Masud is developing a complete genetic interaction map for Barth syndrome to find other genes that might be involved. The disorder, for which there is no treatment, is caused by the loss of a single gene that encodes a protein called tafazzin. It affects each person differently with a large range in symptoms and their severity. Disease variability is probably due to genetic modifiers, other genes in the genome that affect how the body deals with the loss of tafazzin. Masud hopes to identify these modifiers to shed light on the role of tafazzin in the cell and provide clues to developing new treatments.

“It’s nice to know that a project like this is recognized and that it could make a meaningful contribution,” says Masud of receiving the award. “As a rare disease, Barth syndrome does not get much attention and so it is nice to hopefully develop a bit more traction for it and get more resources.”

In her previous project, published in Cell Reports, Masud helped identify large differences at the molecular level between stem cells grown on different materials which could affect their use in therapy.

When she’s not helping run U of T’s sailing club, Masud enjoys running, swimming and fencing as a way of keeping fit for future space travel.

Advances in AI-powered computer vision are changing modern life, from smartphone banking to medical diagnoses. But when it comes to cell biology, computers still have a lot to learn—and Dorrington awardee Nil Sahin is teaching them.

Sahin, in her fifth year of PhD in molecular genetics, is developing algorithms for sorting cells from microscopy images into distinct classes based on their appearance. NIL SAHIN“It’s known as outlier detection, a classical problem in computer science,” says Sahin. “These algorithms learn what normal things look like and they recognize abnormalities.”

Abnormalities might be caused by genetic mutations, revealing clues about gene function at the cellular level. Data analysis remains a bottleneck, however, with many labs still sorting images by eye.

Sahin has an undergraduate background in both computer science and biology, and continued to develop these skills under the mentorship of Brenda Andrews, Director of the Donnelly Centre and a pioneer of large-scale cell biology studies, and Quaid Morris, a professor of molecular genetics and machine learning expert.

“It was a great partnership that I had the opportunity to create because they are both world-renowned in their fields,” says Sahin. “And they are always available with their constant support and motivation when I need it the most.”

Working with the images of yeast cells, which have the same basic structure like human cells but are easier to study thanks to their smaller genome, Sahin has been developing computational tools that can sort individual cells based on the shape of their 18 internal compartments. Scoring how each of the 6,000 yeast genes affects compartment shape means analyzing billions of cells. She quickly realized there is no one-size-fits-all algorithm that can handle the task, applying instead distinct algorithms across the compartments.

In a study published in the journal Molecular Systems Biology, Sahin helped identify all the genes involved in endocytosis, a process by which cells take up nutrients and other molecules from their environment. The gene list might reveal drug targets for many diseases, like cancer, in which this process is flawed.

The Dorrington award is a “wonderful recognition”, Sahin said. “It is a great career boost and proved to me that I am doing well in my research.”

She previously won a 2016 Cecil Yip Doctoral Research Award, which recognizes excellence among the first-year students pursuing cross-disciplinary research in the Donnelly Centre.

Like most people, Dorrington awardee Benjamin Kingston was personally affected by cancer through friends and family, which shaped his research interest. BENJAMIN KINGSTON (PHOTO BY QIN DAI).“Cancer is such a complicated disease and so different from person to person,” says Kingston. “Even within one person the tumour structure and cell make-up is diverse.”

All this—and the fact that tumours are made from a patient’s own cells— has made it difficult to make treatments that specifically kill cancer without harming healthy tissue.

Four years ago, Kingston joined the group of Warren Chan, Director of the Institute for Biomaterials and Biomedical Engineering and investigator at the Donnelly Centre, to explore tiny nano-scale particles as a means to deliver drugs directly into tumours.

“Warren is a great mentor, always willing to stand up for his students,” says Kingston, who is in the graduate program at IBBME. “He’s really good about pushing me to do better science and to be a better-rounded scientist.”

Nanoparticles can be engineered to deposit drugs into tumours after being injected into the bloodstream, but the outcomes of human trials have been disappointing. Now, thanks to Kingston and others in the Chan lab, we know why.

Their research, published in Nature Materials, has cast doubt on the accepted view about how nanoparticles reach tumours. Instead of passively leaking from blood vessels, the particles are actively transported through the walls of blood vessels, although the exact mechanism remains unclear. Kingston is now developing imaging tools to map tumours in three dimensions, along with intertwined blood vessels and immune cells, all of which can impact drug delivery.

“Some structures of tumours might be more conducive to certain therapies than others, which would be important for the development of personalized cancer medicine,” he says.

The Dorrington award is a great boost for Kingston who hopes to become a professor one day. “Winning this award is a prestigious achievement because a lot of graduate students I looked up to had won this award when I first came to the Donnelly Centre.”

“I am very appreciative of the people that support research,” he says. “All these discoveries form the foundation that allows us develop better therapies for patients.”