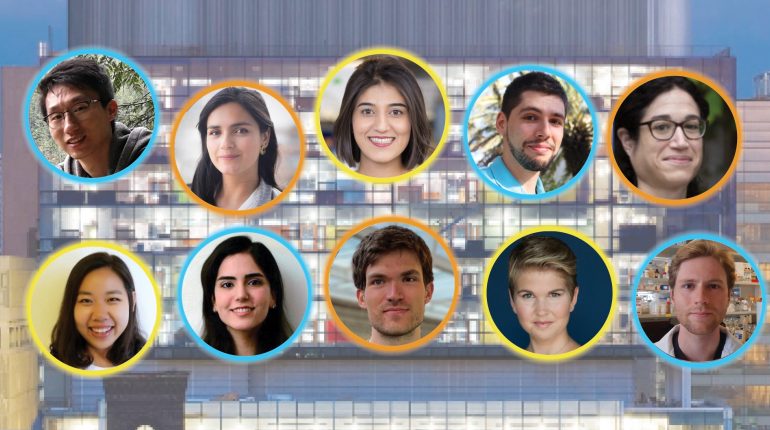 How can the molecular makeup of liver cells point to better treatments? Can we deliver drugs directly into tumours? What is the role of a long-mysterious protein particle in cells?

These are some of the questions being asked by the recipients of the 2020 Cecil Yip Graduate Research Award, which recognizes first year students conducting cross-disciplinary research in the Donnelly Centre with the aim of revealing biological insights about health and disease.

The annual award was established in honour of late U of T Professor Cecil Yip, former vice-dean of research at the Faculty of Medicine and co-founder of the Donnelly Centre, which has become a global hub for scientists from diverse fields working to improve human health.

Enrolled in graduate programs at U of T’s Departments of Molecular Genetics (Mogen) and Chemical Engineering & Applied Chemistry (ChemE) and the Institute of Biomedical Engineering (BME), this year’s winners are working at the intersection of genomics, bioengineering and computer science on projects that could reveal new ways to tackle liver disease, cancer and other ailments.

“On behalf of everyone on the award committee I would like to congratulate the recipients of the 2020 Yip Doctoral Research Award,” says Christopher Yip, Dean of the Faculty of Applied Science & Engineering and Principal Investigator in the Donnelly Centre where he also serves as Chair of the award committee. “The awarded projects are at the cutting edge of biomedicine and provide fantastic opportunities for our students to hone a diverse set of skills as we train them to become inventors of tomorrow,” he says.

Donnelly Centre investigators and U of T professors Will Ryu, Igor Stagljar and Jason Moffat served as award committee members to elect recipients.

Three Yip awardees, Ronald Xie, Delaram Pouyabahar and Zoe Clarke, from Professor Gary Bader’s group, are focusing on the liver, a key metabolic organ for which there are limited treatment options. The lab previously helped create the world’s first map of liver cells at the molecular level and they are now using it to find clues that could lead to new therapies.

Xie (Mogen) is combining volumetric electron microscopy with gene expression data from liver cells to map the organ down to nano-meter resolution. This will help produce a detailed molecular map at the level of single cells, but it requires a complex integration of cell imaging and genomics data. Xie is also developing neural network algorithms, a form of artificial intelligence, that automatically track cells in 3D to help him with analysis.

Pouyabahar (Mogen) is developing computational models to enable a comparison of the molecular makeup of healthy and sick liver cells across different species. The goal is to be able to better predict how the human liver will respond to medications, or if a transplant will be rejected, by studying it in other animals.

And Clarke (Mogen) is tracking the development of viral-induced hepatocellular carcinoma, the most common type of liver cancer, to shed light on how the disease starts and develops. She is tracking the chronic viral infection in individual woodchuck liver cells at different stages of disease to capture how tumours change over time. She plans to model these data with applied evolutionary principles to search for an explanation of how chronic viral infections cause cancer. The liver is also the focus, albeit from a different angle, of Yip awardees Elana Sefton and Zahra Sepahi in Professor Warren Chan’s lab. The lab seeks to engineer nanoparticles filled with cytotoxic drugs which, once injected into the bloodstream, would deliver the treatment directly into tumours. But, a few years ago, they discovered that the majority of injected nanoparticles end up in the liver. They are now working to better understand why this happens and how the particles could be better diverted to tumours.

To this end, Sefton (BME) is investigating the so-called Kupffer’s cells, which are resident immune cells in the liver and thought to be chiefly responsible for sopping up nanoparticles. The receptors on the cells’ surface could be binding the proteins from the bloodstream that coat the particles as they travel through the body, not the particle itself. Sefton will first identify these receptors and then determine the blood proteins on the particle that are binding to the receptor(s). These results will guide the design and synthesis of nanoparticles to improve their delivery to tumours.

Meanwhile, Sepahi (BME) is investigating how nanoparticle size and dose affect their delivery efficiency. Recent work from the lab found that more particles reach tumours when they are injected at a higher dose. At the same time, smaller nanoparticles seem to be more efficiently delivered at lower doses. By identifying a relationship between nanoparticle size and dose, Sepahi will establish a robust approach for future research and clinical applications of cancer nanomedicines.

Yip awardee Kai Slaughter (BME) in University Professor Molly Shoichet’s lab is also developing new methods to deliver drugs into cells but his approach employs a modified bacterial toxin. His goal is to use a weakened toxin which does not cause disease but whose natural ability to efficiently enter human cells could be exploited for the delivery of therapeutics.

Two more Yip winners in the Shoichet lab are working on regenerative medicine projects concerning lung disease and blindness. Chang (Amber) Xue (BME) is studying lymphangiolieomyomatosis, or LAM, a rare fatal disease that stems from abnormal growth of smooth muscle cells, mostly in the lungs. By investigating human LAM cells in culture, Xue hopes to learn how the disease develops and find drugs that might be able to halt it.

Daniela Isaacs-Bernal (ChemE) is investigating the possibility of awakening stem cells in the eye to repair tissue damage in patients who lost vision from it. In collaboration with Derek van der Kooy’s lab, also in the Donnelly Centre, which recently identified cellular factors that prohibit retinal regeneration, Isaacs-Bernal is developing a controlled release strategy for the delivery of inhibitors of these factors into the mouse retina to activate its repair. Just as retinal stem cells hold promise for vision repair, so could the stem cells that reside in the muscles be harnessed to repair injury and wasting from old age. Erik Jacques (BME) in Associate Professor Penney Gilbert’s lab is searching for cellular factors in the developing muscle and its environment that could be harnessed to activate regeneration. He is setting up an automated platform that will allow him to perform genome wide screens in search of these factors using skeletal muscle tissue grown in a dish, previously developed in the lab.

Finally, Kenny Rebelo (Mogen) in Professor Benjamin Blencowe’s group is combining cryo-electron microscopy, molecular biology and computational approaches, in collaboration with the groups of Fred Allain, at ETH in Zürich, and Oliver Mühlemann, at the University of Berne, to reveal the composition and function of the 40S ribonucleosome, a relatively large cellular particle composed of RNA and protein molecules. Although known to science for decades, the particle’s role has remained a mystery, but Rebelo’s research already points to its involvement in the transport of molecules in and out of the cell’s nucleus where the DNA is stored.