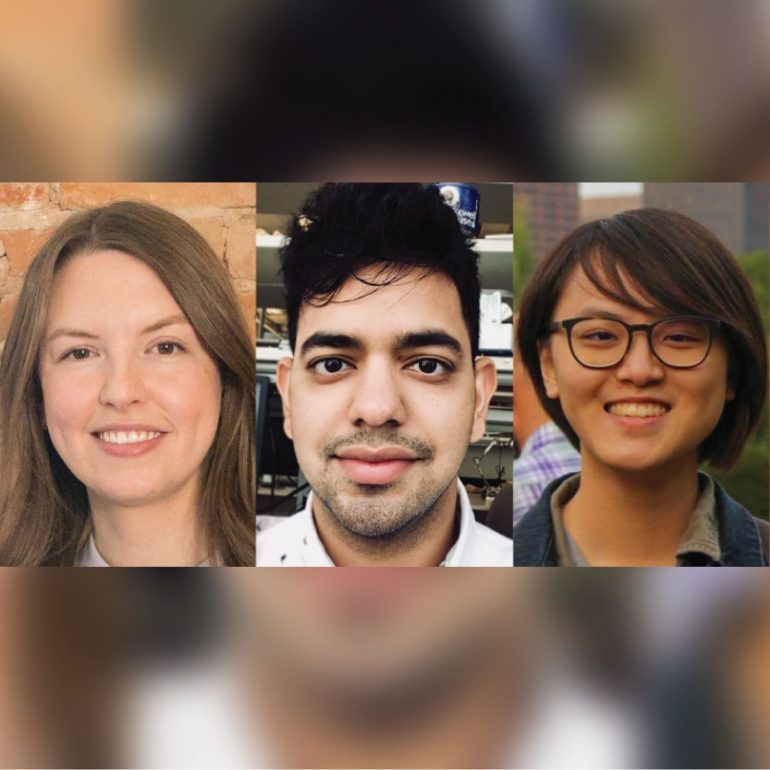 Can global food supply be protected from parasites? Can we spot diabetes before symptoms onset? How can drugs be delivered only into cancer cells? Answering these questions is no small feat but three Donnelly Centre students are making progress and reaping prizes along the way.

Jessica Knox, Shubham Gupta and Jamie Wu are the recipients of the 2021 Jennifer Dorrington Graduate Research Award which recognizes students enrolled in graduate programs at the Temerty Faculty of Medicine who are doing doctoral research in Donnelly Centre labs. The award was established in 2006 in memory of Jennifer Dorrington, who did pioneering research on ovarian cancer as a professor in the Banting and Best Department of Medical Research, which paved way for the Donnelly Centre.

“On behalf of everyone on the Dorrington award committee, I would like to offer warmest congratulations to the winners. We were really impressed by the exceptionally strong pool of candidates this year,” says Gary Bader, Professor of computational biology and molecular genetics in the Donnelly Centre who chairs the award committee, with Donnelly Centre investigators Liliana Attisano, Henry Krause and Fritz Roth as members.

“Jessica, Shubham and Jamie have made amazing progress, especially during this challenging year, and their research will have an important impact on peoples’ lives,” said Bader.

All three recipients said that winning the Dorrington award in the midst of a global pandemic that saw lives—and research projects—upended is a big confidence boost and a motivation to keep making progress.

As a fourth year PhD student in molecular genetics in Professor Peter Roy’s lab, Jessica Knox is searching for chemical compounds capable of killing parasitic nematode worms which attack crops. It has been estimated that these parasites are responsible for a global crop yield loss of 12 percent, or over 150 billion U.S. dollars in damage every year.

“It’s already a huge issue,” says Knox, adding that the problem is only likely to grow as global food security comes under strain from increased population growth.

The Roy lab previously discovered several novel compounds that can kill a widely used lab nematode model, Caenorhabditis elegans. Supported by a Burroughs Wellcome Fund travel award, Knox went on to test these compounds in a real-life scenario at the U.S. Department of Agriculture research centre in Corvallis, Oregon. Working there with Dr. Inga Zasada, she found that some of her compounds were even more effective than existing nematicides in protecting the roots of tomato plants from the widespread and highly destructive parasite, Meloidogyne incognita.

Knox says that her stint at the USDA allowed her to grow as a scientist as it allowed her to do the types of experiments she would not have been able to otherwise. “Peter has given me both independence and support as needed and I’ve been able to learn and accomplish a lot thanks to his mentorship.”

Knox is now trying to work out how the compounds work at the molecular level. She has discovered that, upon being ingested, the compounds get broken down into toxic molecules which eventually kill the worm. Importantly, the compounds remain inert in other organisms, such as fish, and in cultured human cells, suggesting that they are unlikely to be harmful to humans.

Predicting diabetes before it strikes

Like Knox, Shubham Gupta is also in his fourth year of PhD with the goal to develop computational methods for analysis of protein content in blood. Working in the laboratory of Professor Hannes Röst, Gupta is trying to identify early biomarkers of diabetes.

Current bloodwork methods are able to identify only a handful of protein species at a time. Yet blood is brimful with thousands of proteins whose levels change depending on person’s health with potential for finetuned diagnostics. Gupta has been able to increase throughput of protein identification by mass-spectrometry to 300 proteins in one hour, opening the door to collection of big data specific to an individual in a step toward personalised medicine.

Gupta is collaborating with personalised medicine pioneer, Michael Snyder, whose lab at Stanford University, California, he visited to learn data acquisition and study design. Snyder’s team collected blood samples from 100 prediabetic individuals for three months over five years during which some developed diabetes. Gupta developed a tool which allows tracking of protein species over time by filtering variation between samples collected on different days and between different individuals. He is now working to identify protein signatures that predict diabetes years earlier than current tests.

“I am grateful to my supervisor for making it possible for me to go to Dr. Snyder’s lab where I could learn the technology and work with our collaborators,” says Gupta. “Hannes has been a great mentor throughout and provides me with a good direction to pursue and in which to grow.”

The youngest of the winners, Jamie Wu, is in her third year of PhD in biomedical engineering in the group of Professor Warren Chan, who is also Director of U of T’s the Institute of Biomedical Engineering. Wu’s goal is to learn how medication-carrying nanoparticles are transported from the bloodstream into tumours in a bid to enhance targeted tumour drug delivery.

The Chan lab previously showed that only a fraction of nanoparticles injected into the bloodstream reach tumours. They also showed that the particles undergo active transport across cells lining the blood vessels to enter the tumour instead of leaking in passively as previously thought. Wu is using a combination of genetic approaches, in collaboration with Jason Moffat’s lab in the Centre, as well as and optical and electron microscope imaging to identify the cellular components involved in the transport.

“If we can figure out what cell machinery is used to transport nanoparticles, we’ll know what targeting ligand to put on these nanoparticles for them to cross the blood vessel wall and enter the tumour in larger quantities. These biological insights will allow us to design our particles better and get them into the cancer cells,” says Wu.

“If we can figure out what targeting ligand to put on the nanoparticles to transport across the blood vessel wall and into the cancer cells we can design our particles better and get them into the tumours in larger quantities,” says Wu.

For Wu, the last spring’s lockdown which saw the labs shut and research operations brought to a grinding halt was a time to reflect and plan the next set of experiments with help from her mentor.

“Warren is fantastic, he is very supportive and always available when we need him for direction,” she says.