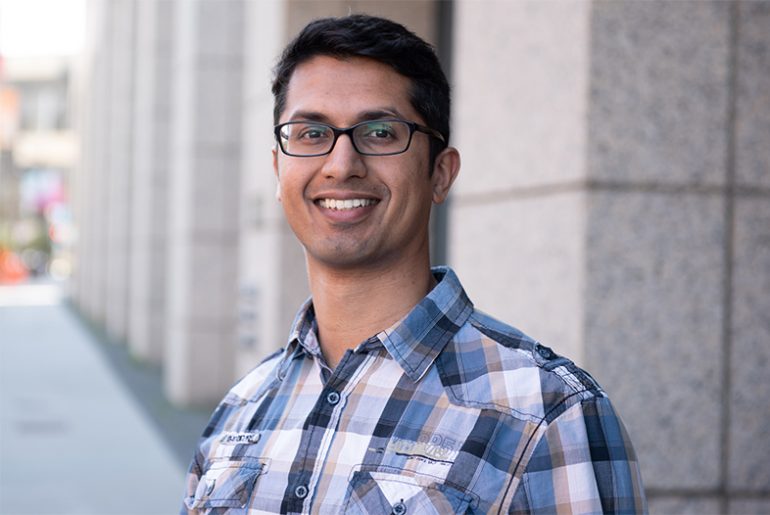 When Abdullah Syed moved to San Francisco in January for his dream research job, he did not expect to end up confined to his apartment due to the COVID-19 lockdown.

With his research on hold, Syed is dividing time between helping set up a SARS-CoV-2 testing lab and learning new computer programs for future data analysis. Such advance preparation allowed him to make fast progress during his PhD, for which he won a prize.

Syed is the latest winner of the Donnelly Centre Research Thesis Prize, awarded annually for the best doctoral research completed at the Centre. An engineer by training, he studied how tiny nano-scale particles travel through the body to deliver drugs directly to tumours under the supervision of Warren Chan, a principal investigator at the Centre and the director of U of T’s Institute for Biomaterials and Biomedical Engineering.

“In a short time, Syed developed new tools that allowed him to challenge a central dogma in cancer nanomedicine and open new research avenues that could ultimately improve therapy for patients,” says Moffat.

Nanoparticles are engineered molecules that tend to accumulate inside tumours after being injected into the bloodstream. Scientists across the world seek to harness these particles for cancer diagnostics and to deliver medications to cancer cells.

“A lot of medications we use to treat cancer don’t reach cancer cells very well and also cause a lot of damage to healthy cells,” says Syed. “If we could improve drug delivery to cancer cells, a lot of treatments would have a better chance of working.”

Despite their potential, nanoparticles have had mixed success in clinical trials, prompting Syed and his colleagues to investigate in more detail their transport in the body.

“We wanted to explore how nanoparticles get past blood vessels to be able to make this process more efficient,” says Syed.

With fellow graduate student Shrey Sindhwani, Syed adapted a method called CLARITY, which renders tissues see-through and allows imaging of whole turmous by microscope. With a clear view of the entire three-dimensional structure of the tumour and its associated blood vessels, they could better observe the particles’ journey between them.

To their surprise, the particles did not passively leak from the blood vessels to be taken up by cancer cells, as had been widely accepted in the field. Instead, active transport appears to be involved, meaning that cells expend energy to move particles and their cargo across the cell barriers.

“The fact that nanoparticle transport is an active process opens new doors now,” says Syed. “It’s really hard to change a passive process. But when you have an active process, that means there are components driving it, and if we can find the components that drive or inhibit the transport, then it should be possible to make it more efficient.”

The findings, published in the current issue of the prestigious journal Nature Materials, could change how nanoparticles are used for cancer diagnosis and treatment. That the paper landed on the journal cover with an accompanying editorial and news articles is a badge of honour few graduate students can claim.

It was not all smooth sailing for Syed however, who switched to cancer drug delivery from another project half way in his PhD.

“It was a rough ride in the beginning, but it was really great having Warren as a mentor to help me through,” says Syed. “He taught me to think about coherent long-term goals and that you should not just do experiments for the sake of experiments but to focus on solving a major problem.”

Syed is quick to point out that his success also comes from teamwork and bouncing ideas off others in the lab. He especially enjoyed working alongside Sindhwani, whom he’s been friends with since they were both engineering students at the University of Waterloo.

After graduating last year, Syed moved to California for a postdoctoral stint with Jennifer Doudna, who is world-renowned for her co-discovery of the gene editing system CRISPR-Cas9, at the University of California, Berkeley. His focus there is on developing methods for delivering CRISPR components into tissues and organs for future gene therapies.

Syed hopes to return to Canada to start his own research group one day. But for now, he’s just waiting for the coronavirus crisis to pass so he can be back in the lab doing what he loves best—science.