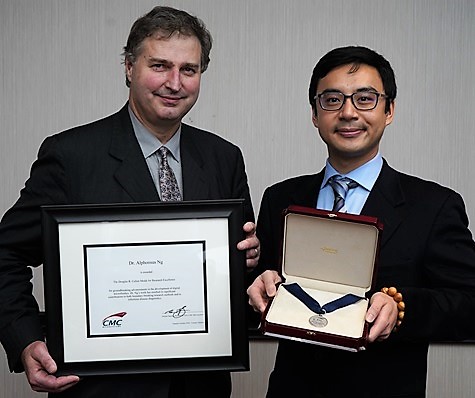 Alumnus Dr. Alphonsus Ng is the recipient of this year’s Douglas R. Colton Award for Research Excellence. This annual prize, which is hosted by CMC Microsystems, was awarded to recognize Alphonsus’ work in Dr. Aaron Wheeler’s lab at IBBME. During his PhD and post-doctoral work, Alphonsus and his colleagues developed a portable microfluidic device that measured measles and rubella antibody levels in patient blood. Increased levels of antibodies in the blood are often an indication of the body ramping up its immune system, to fight off infections. By detecting this phenomenon early in the disease progression, this information can inform physicians to prescribe appropriate therapy to treat patient ailments. This technology was deployed and field tested on more than 130 patient samples in Kakuma, a refugee camp in rural Kenya between May – June of 2016. This work was published in Science Translational Medicine earlier this year.

“The previous recipients of this award are people I have looked up to throughout my graduate school career. Receiving this recognition from CMC Microsystem is an unbelievable honour.” says Dr. Alphonsus Ng.

The Douglas R. Colton award is given on the basis of research excellence at the national level in micro-nano research. Dr. Ng’s award nomination was supported by both University of Toronto and his collaborators at Abbot Laboratories. Drs. Xinyu Liu and David Sinton from the Department of Mechanical & Industrial Engineering were some of the past award recipients from University of Toronto.

“Alphonsus was a one-of-a-kind student. Not only was he an outstanding researcher, but he also was a terrific lab citizen, helping and assisting all who came across his path. I am so proud of him for winning this award.” says Dr. Aaron Wheeler, “I wish him success in his future endeavors.”

Dr. Ng has since continued his post-doctoral research work in Dr. James Heath’s group in the Institute for Systems Biology in Seattle, where he is developing microfluidic technologies that will guide the design of cancer immunotherapies.