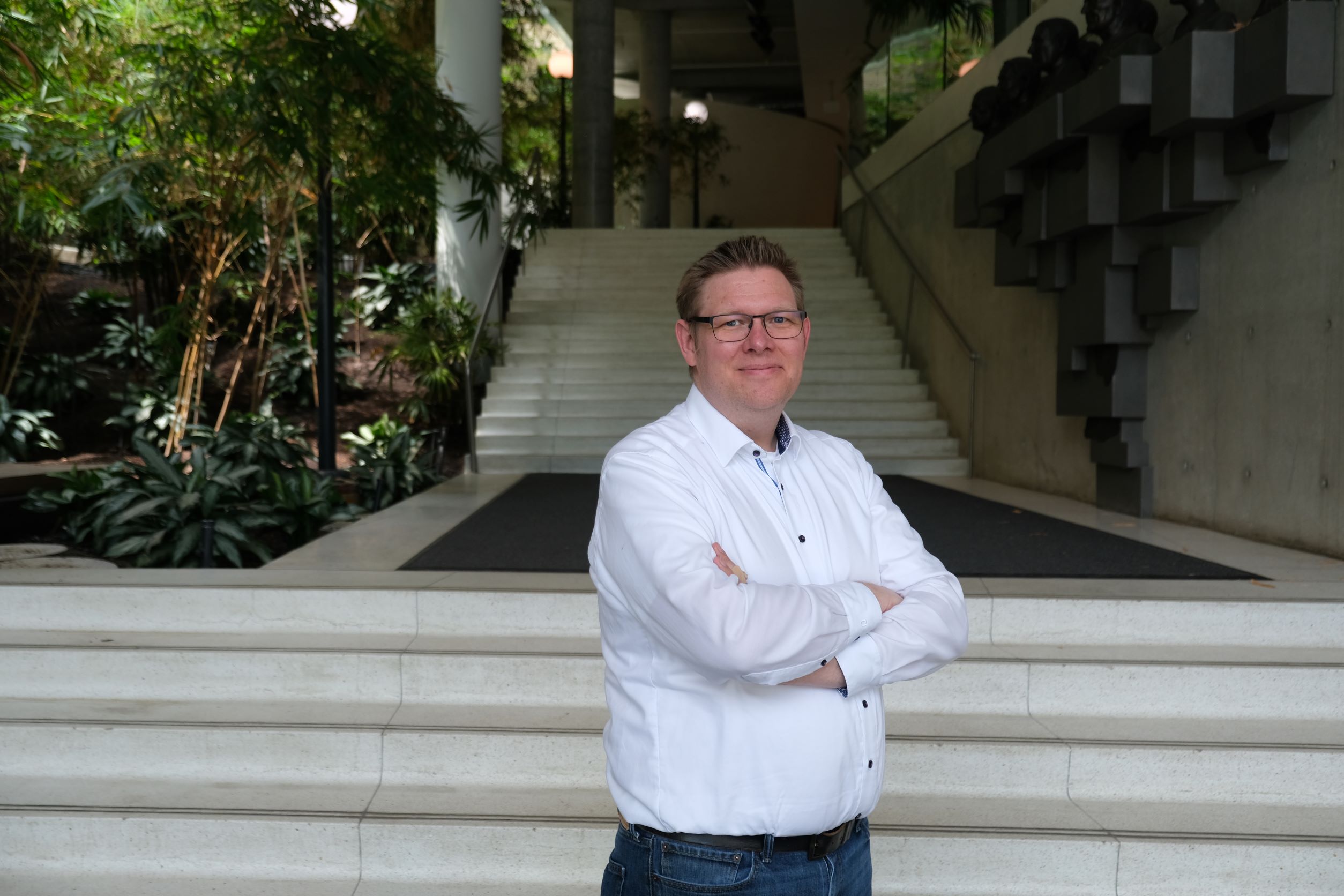 Professor Lueder Alexander Kahrs has officially joined the Department of Mathematical and Computer Sciences at the University of Toronto Mississauga (UTM) and the Institute of Biomedical Engineering (BME) as an Assistant Professor on July 1st, 2022. Dr. Kahrs undergraduate teaching will be at UTM while his graduate activities will be in BME.

Originally from Bremen, Germany, Dr. Kahrs received a multitude of training at Karlsruhe Institute of Technology (KIT), Vanderbilt University, Leibniz Universität Hannover, and The Hospital for Sick Children before starting his faculty position at the University of Toronto.

Since 2002, Dr. Kahrs had published over 130 peer-reviewed articles on the topics of computer, robot and laser-assisted surgery, Augmented Reality and vision-guided procedures.

“I am very excited about Dr. Lueder Kahrs joining the Department of Mathematical and Computational Sciences. His interdisciplinary background and expertise in medical computer vision and robotics will not only complement our computer science program and robotics cluster but also strengthen our ties to biomedical engineering. I am sure that Dr. Kahrs will influence a new generation of computer scientists and engineers pushing the frontiers of medical technology!” Says Dr. Ilia Binder, the Chair of Mathematical and Computational Sciences.

“Dr. Lueder Kahrs is a valuable member of the Department of Mathematical and Computational Sciences. With his expertise in robotics and computational sciences, Dr. Kahrs would be able to influence a new generation of biomedical engineers in Canada.” Says Dr. Warren Chan, the Director of the Institute of Biomedical Engineering.

We talked to Dr. Lueder Kahrs to learn about his aspirations, research topics, and the future of robot-assisted surgery.

How would you describe Bremen, Germany to someone who has never visited there?

Bremen is a lovely mid-sized town in Northern Germany with a history of over 1,200 years, including a proud seafaring and Hanseatic League tradition. The town hall and the statue of Roland – both erected in the early years of the fifteenth century – are UNESCO World Heritage Sites. When you visit Bremen, you will also see the Bremen Town Musicians, the unofficial heraldic animals of Bremen. They originate from the Brothers Grimm’s fairy tales.

The river Weser divides Bremen into two parts and its mouth is approx. 60 km north of the town. I spend most of my adolescence rowing on the Weser. If I should name my favourite spot, it would be the floating dock of my rowing club. Most relevant to my research area is the Fraunhofer Institute for Digital Medicine (MEVIS) and the Robotics Innovation Center of the German Research Center for Artificial Intelligence (DFKI) in Bremen. My research interests regarding lasers date back to a guided tour in twelfth grade at the Institute of Applied Beam Technology (BIAS).

What will be the goal of your research group?

My lab Medical Computer Vision and Robotics (MEDCVR) is pushing the limits of human resolution in terms of visual and temporal perception or manual manipulation. Our aims are to advance physicians’ skills by technology and bring such technology into the operating room. We develop camera-based methods for autonomous execution of interventional robots as well as methods to provide therapy suggestions using Augmented Reality.

What is the role of mathematics and computational science in biomedical engineering?

I anticipate that every biomedical engineer needs a multitude of math and statistics skills over their work lifespan. From my perspective, computational and data science will become even more important for the research field of biomedical engineering in the future, if this isn’t already the case. I can only recommend every student ramp up their skills in those disciplines. With my appointment in Mathematical and Computational Sciences at UTM I am happy to build a bridge between the departments.

From my perspective, computational and data science will become even more important for the research field of biomedical engineering in the future, if this isn’t already the case. I can only recommend every student to ramp up their skills in those disciplines.

As someone who originates from a physics background, how should biomedical engineers look at problems differently?

I see myself as an interdisciplinary researcher, who is stimulated by clinical experts and challenges. Indeed, my undergrad and Master’s program – the German ‘Diplom’ – was in physics. I was fascinated by math problems, experimental work, electricity and electronics, computers, and astronomy very early in my childhood. An internship in Berlin, Germany at the Institute for Research and Development of Sports Equipment (FES) influenced my interests in scientific topics in biomedicine and engineering. After my Master’s with emphasis on semiconductor and laser physics, I started my PhD in computer science with projects in Augmented Reality and surgical robotics. Through close collaborations with physicians, I was often observing surgeries in the operating room to get a better understanding of the challenges. These were eye-opening to me, as I realized that most methods developed in engineering or computer science labs aren’t necessarily suitable for immediate translation into the operating room.

To finally answer your question, most biomedical engineers are well-educated to solve real-life problems between disciplines, especially for and with physicians. Nevertheless, every student and scholar will need further knowledge left and right from the standard biomedical engineering curriculum. In my opinion, physics, math and computer science are ideal disciplines, that should strongly be considered for this purpose in everyone’s life-long learning process. Also search for collaborators, that broaden your field of knowledge, to make sure that the whole team is as interdisciplinary as possible.

In 20 years, what do you think is the trajectory of robot-assisted surgery?

I am sure, that we will see a lot of developments toward autonomous robot systems in the operating room. Those will perform the whole or parts of the surgery independently and probably better than the average physician. I know that this is a very controversial statement, and I am not saying, that we won’t need experts that perform those surgeries and interventions anymore. There will always be surgeons, who have better skills than the robot systems. But I foresee that several of those experts will feed in their skills in artificial intelligence and robotic system, such that it can combine the strength of each expert and fewer weaknesses will remain in the system. It is a long way until this becomes reality, but we start to observe a similar trend in the area of self-driving cars and robotics applications outside medicine.

What is your teaching philosophy?

My teaching philosophy is guided by the core principle that students must be active participants in their learning and not only consume lectures like sitting in a cinema. In my courses, I aim to create a stimulating environment with challenging topics to which the students can relate (e.g., using their mobile devices for creating an app that they think is useful). I guide them to develop their own problem-solving strategies and empower them to take ownership of their learning. As each student is different in terms of their knowledge, past experiences and rate of learning, I believe that it is my responsibility to help them identify a project that excites them, is aligned with their skill set, but is also challenging to them.

How would you describe yourself outside of research?

Still interested in research. Hunting for good ice cream in the summer. Loving water and my wife Jessica. Exploring and travelling the world.