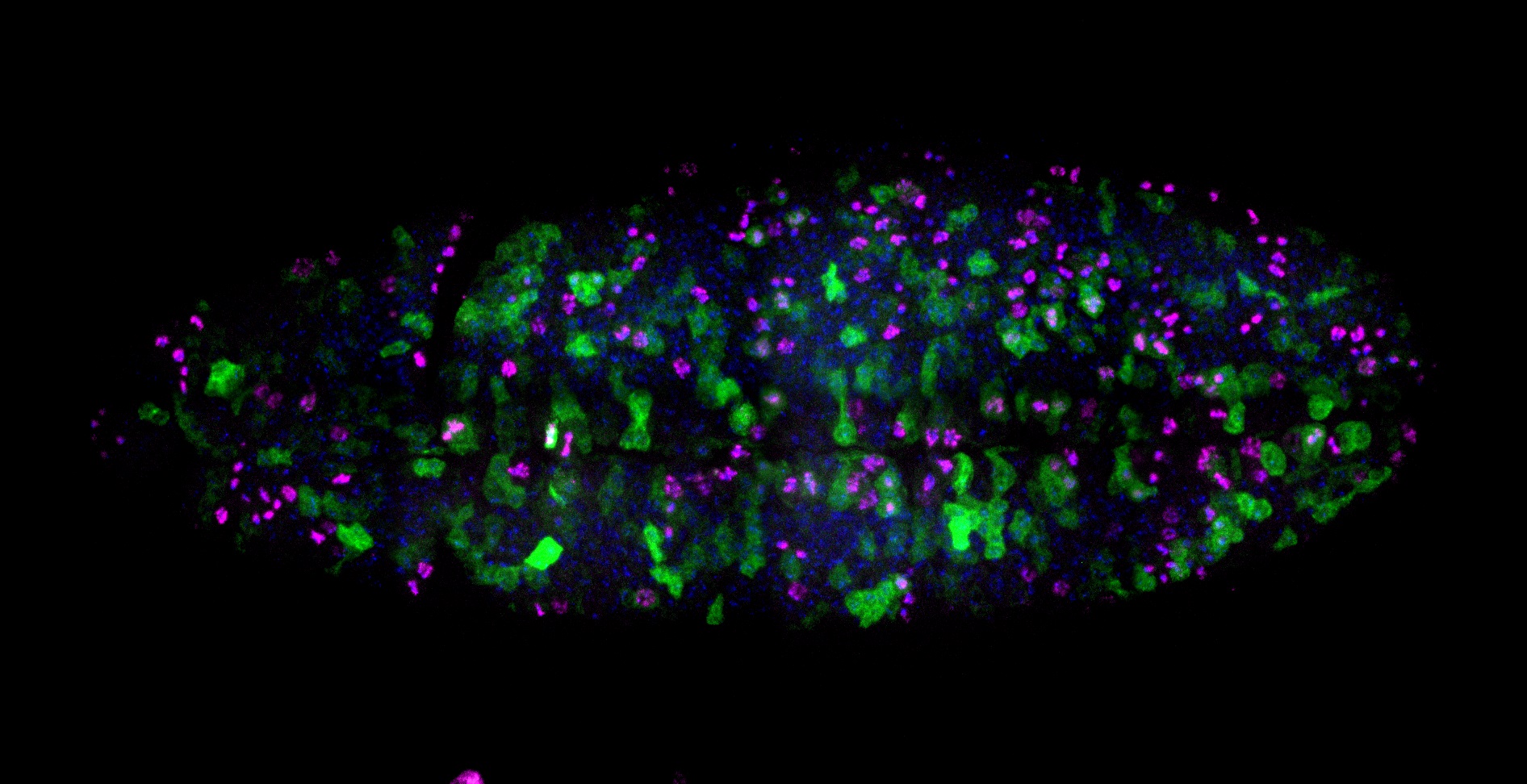 A sinkhole formed in the middle of the road following a heavy rainfall season. After the initial panic subsided, the city officials began to plan for city restoration – a pre-programmed initiative that clicks into place when natural disasters strike. The local police department is first contacted to maintain order and triage traffic, raw materials such as asphalt are shipped from overseas, underground water pipes are custom-made in local shops, and construction crews are called in to initiate the reconstruction process. The speed in which anyone can coordinate these tasks is essential in restoring functions to the city.

Wound healing is no different. When an injury occurs, the body coordinates cellular machineries through complex biological pathways in order to repair the damage. In embryos, which excel at tissue repair, the workhorses leading the carriage are two cytoskeletal proteins – actin and myosin. Simply put, these two subcellular components ‘pull’ on the cells through contractile forces and coordinate cellular movements in the body. Since force generation is so ubiquitous and fundamental in biological organisms, this dynamic duo is involved in various biological processes – from embryonic development to wound repair.

To understand how actin and myosin contribute to wound repair, Dr. Rodrigo Fernandez-Gonzalez and his team have been looking into the mechanism by which cells communicate with one another as wounds are patched and closed. In a paper published last year in the journal Nature Physics, Rodrigo’s team discovered that wound healing progresses at variable rates across the circumference of the wound. In other words, the damaged area does not close at the same speed throughout, suggesting subtleties in the way cells communicate with one another during the wound’s closure. Understanding this fundamental process is the key to developing therapies that can accelerate wound repair.

Rodrigo and his colleagues are developing a bird’s-eye view surveillance system to track how individual cells and molecules move during the process of wound healing.

When Rodrigo started his lab in 2012, he set out to answer one question – How does wound repair occur? He decided to use Drosophila melanogaster – also known as the fruit fly – as the model biological system. Little maggots hatch out of their eggshells following a short, 24-hour gestation period. Compared to 21 days of gestation in rodent models, scientists can observe wound-healing on fast-forward, thus allowing them to generate large amounts of data within a short span of time. Fruit flies have a monumental place in the history of biology, as various cancer-causing pathways (E.g. Wnt, Notch) were first discovered via this model organism. These pathways were then cross-referenced in humans, leading to the development of numerous therapeutic molecules for the treatment of cancer.

“We coat the surface of a petri dish with apple juice, let the flies lay their eggs, and then collect them,” said Rodrigo. “A quick treatment of the eggs with bleach removes their hard shell, exposing the embryo to the external environment.” Rodrigo and his team then use a laser to blast a hole, wounding the fruit fly embryo before observing the healing process under the microscope. “It’s like playing a video game. You select a region on the embryo and fire! Afterwards you can observe the wound healing process in a movie.” Since these fruit flies are genetically modified to have fluorescent cellular components, scientists can associate each component with a different colour under the microscope.

Aside from the identification of individual cells, Rodrigo and his team can gather a plethora of ‘biometric information’ about each cell. These parameters include time, location, geometry, velocity of movement, distribution of proteins within the cell, and axial movement, to determine where the cell moves in the 3-dimensional space. There is an enormous amount of data that can be gathered from this process. “We had one student that gathered 100,000 images over the course of a year,” said Rodrigo. In order to make sense of this massive trove of information, machine-learning algorithms were employed to ascertain trends and patterns in the role of individual cells and proteins in wound healing over time. This concept of identifying cellular components based on fluorescent ‘biometric data’ is analogous to tagging every person on the map with a unique GPS tracker. In other words, Rodrigo and his colleagues are developing a bird’s-eye view surveillance system to track how individual cells and molecules move during the process of wound healing.

Dr. Teresa Zulueta-Coarasa is the lead author on the Nature Physics paper and was also one of Rodrigo’s first PhD students. When she joined the lab in 2012 as an industrial-mechanical engineer, she knew very little about biological systems. “I first started my career in a car company,” Teresa said. “I remember that the learning curve was really steep when I joined the Fernandez-Gonzalez lab.” Over the course of 6 years, she was able to pick up various skill-sets like coding, mathematical modeling, biological assays, and microscopy techniques. “When you are learning so much every day, it really motivates you to keep going,” said Teresa. “I think the supervisor and the environment are the key, and it is extremely important to develop relationships with good people. Rodrigo is a nice person, he has a lot of great ideas and he also gives you the freedom to pursue your own ideas while offering guidance.”

When you walk into Rodrigo’s office, you are greeted with a collection of marathon bibs arranged in 5 rows and 4 columns. An odd one sticks out – the 21st bib in a new row. A unicorn that is symbolic of the Boston Athletic Association decorates the left corner along with a caption reading ‘2018 Boston Marathon’. Qualifying for this particular run is no easy feat, as only 10% of runners qualify to participate in the race. “Training for a marathon would mean I would be dedicating 7-8 hours a week preparing,” When asked whether he saw any correlation between the collective movement of the runners and the research he does, Rodrigo demurred. “Honestly, no,” said Rodrigo with a chuckle. “During the run, there are going to be times when you feel great, but there are long spreads of time when it’s miserable. Much like science. So I guess one prepares you for the other. I was a scientist before I was a runner, so being a scientist prepared me for the run”.