Engineering the brain: the promise of neural engineering in medicine 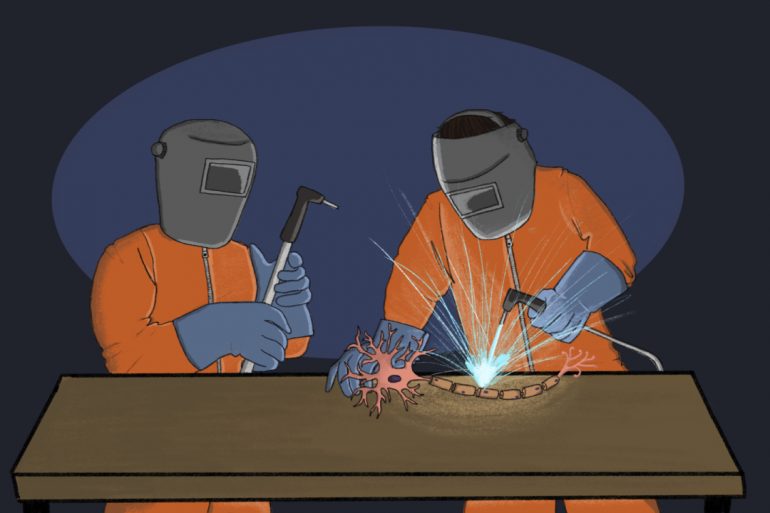 Much of the incredibly complicated human brain remains a mystery to scientists. Despite this complexity, there is new promise for technologies to treat neurological disorders.

A rapidly developing approach is neural engineering, which unites methods of neuroscience and engineering to investigate and repair neural networks.

The discipline has brought together researchers from a diverse array of scientific fields, including biology, chemistry, mathematics, computer science, and engineering. New devices and technologies have arisen from their efforts to help patients with neural disorders, such as epilepsy and Parkinson’s disease.

A new interdisciplinary area of science

Dr. José Zariffa, an associate professor at U of T’s Institute of Biomaterials & Biomedical Engineering, recently co-authored a review paper on the potential clinical applications of neural engineering.

In an interview with The Varsity, Zariffa said that he is mainly working on “decoding signals from the nervous system.” That is to say, his team has focused on analyzing messages sent from the brain to organs and membranes via electrical impulses to guide the development of medical devices.

Such a device could send impulses to a paralyzed muscle to make it contract or relax, which could help patients who have experienced a spinal injury or stroke.

If you were to track the activity of a nerve, you would notice many pathways entering it as “a mix of many different sources.” Zariffa’s team is currently investigating possible ways to separate those signals so that the messages sent to a pathway of interest can be isolated and used for speciﬁc medical purposes.

In recent years, there has been renewed interest in potential applications of neural engineering — as evidenced by prominent enterprises such as the United States’ BRAIN Initiative — which has generated much momentum for the advancement of new technologies developed in the discipline.

The diversity of the possible applications of neural engineering is mind-blowing. For instance, neural technology can potentially reverse memory deterioration resulting from Alzheimer’s disease, restore lost or damaged eyesight, and even make prosthetic limbs move by thought.

Currently, deep brain stimulation, which involves implanting an electrode that sends signals to speciﬁc targets in the brain, is used to treat Parkinson’s disease and severe cases of obsessive-compulsive disorder and depression.

Another emerging trend which shows promise in neural engineering is the stimulation of the nervous system to treat various chronic diseases, ranging from epilepsy to conditions indirectly caused by a malfunctioning nervous system, such as hypertension and diabetes.

The recently-opened Center for Advancing Neurotechnological Innovation to Application launched by U of T and its affiliated University Health Network is an example of a Toronto-based initiative aiming to bring recent advances in neural engineering to clinical settings.

Zariffa’s own research focuses on developing technology to facilitate recovery from damage to the central nervous system resulting, for example, from spinal cord injury or stroke, which may help patients in their day-to-day lives.

While a main objective of neural engineering is to develop devices for clinical applications, it is possible that the advances in this area will be used for non-medical purposes.

For instance, certain biotechnology companies are currently looking into ways to enhance the human brain’s processing abilities by creating brain-computer interfaces based on the most recent advances in artificial intelligence.

Such examples of human augmentation, including Elon Musk’s plan to create “human-AI hybrids” and people “upgrading” their bodies by implanting computer chips, are often sensationalized by media outlets.

Yet, according to Zariffa, modern science is still far from implementing such advances on a broader scale. The ethical considerations of the field, he noted, have not differed considerably from those in most areas of technological development.

Even without the sensationalism of the field, the growing applications of neural engineering remain vast and promising in treating medical disorders.