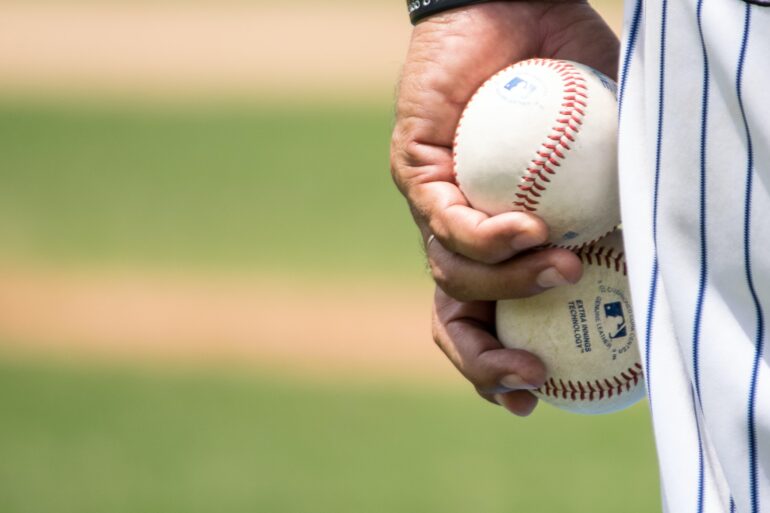 A study conducted by Tohoku University in collaboration with the University of Toronto and NTT Communication Science Laboratories has shown that applying substances to fingertips can considerably change the handling of a baseball. This finding, published in Communications Materials, could alter how these substances will be used in competitive baseball leagues.

In baseball, a hitter can be struck out with greater accuracy with a firmer grasp of the ball. Therefore, controlling the spin rate and the accuracy of the pitch is paramount to winning the game.

Major League Baseball (MLB) declared on June 15, 2021, that the laws prohibiting the use of foreign substances (i.e., sticky substances) on baseballs will be strictly enforced. However, this excludes rosin, a white, chalk-like powder made of magnesium carbonate and pine resin. In theory, applying rosin lowers the likelihood that the baseball will slip from the pitcher’s hand and increases pitch accuracy.

Thus far, there are very few studies that quantitatively determine how much this substance helps with pitching performance and whether this substance affects various leather surfaces differently.

“We wanted to examine the impact of rosin and sticky substances on the friction between fingertips and MLB balls,” said Dr. Kei Masani, an author of the study and research scientist at KITE and associate professor at the Institute of Biomedical Engineering (BME).

Lastly, when comparing MLB balls to Nippon Professional Baseball Organization (NPB) balls, NPB balls were less slippery than those used by MLB. Thus, the effect of grip-enhancing agents was more profound on MLB balls. This may be due to the pre-game ball treatment process, the material used, and the tanning process of the leather.

“This is the very first study investigating the friction between baseball and fingers. We now know that applying rosin must be helpful in stable pitching, and it goes beyond controlling the spin rate of the ball.” said Masani.