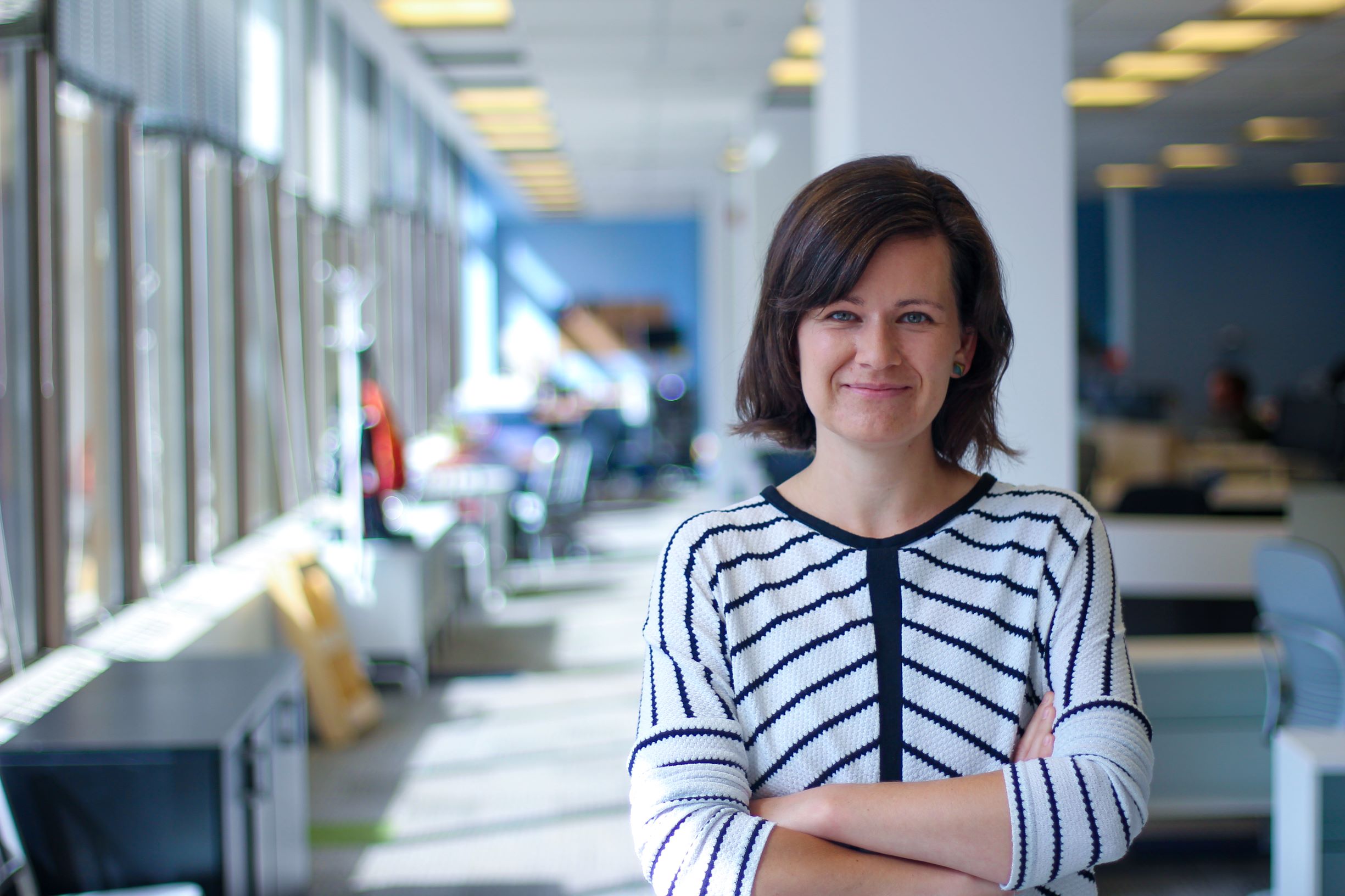 The term “Surgical Precision” is used to describe the finesse and the highly accurate nature in which a surgeon can cut diseased tissue from healthy tissue. This precision depends as much on the skill of the surgeon, as it does on the information they have about the tissue, to inform their surgical decision-making process. As is the case for most medical conditions, it is critical to remove and/or treat diseased tissue to prevent its spread into surrounding healthy tissue. In a disease like cancer, the complete removal of the tumour in some cases is the critical step in ensuring that relapse does not occur. But how do you know for certain that all the diseased tissue has been removed?

Co-founded in 2013 by Liz Munro (IBBME0T9), Perimeter Medical Imaging’s mission is to provide better tools for cancer surgeons. They specialize in building real-time, high resolution imaging devices which provide sub-surface images of tissue that can be used by surgeons for intra-operative tissue assessment.

“Surgeons are usually working with images collected preoperatively – that is, before the surgery, as well as their own visual inspection and palpation of a piece of tissue once it has been excised. They have limited real-time tissue assessment tools to make more informed decisions during the operation.” says Liz.

The gold standard for tissue assessment is post-operative pathology. In this process, an excised tissue specimen is fixed in formalin, embedded in paraffin, and sliced thinly to produce histology slides which can be viewed with a microscope, often leveraging dyes to highlight different cellular structures. A pathologist examines the slides and writes a pathology report outlining their findings. In the case of cancer removal surgeries, if cancer cells are reported as being close to or at the surface of the excised tissue specimen, additional intervention such as a second surgery may be recommended to the patient.

“Postoperative pathology will always be the diagnostic step for excised tissue,” explains Liz, “the challenge is that it takes a significant amount of time – from half-a-day to a full week, to receive the results of this detailed analysis. With a limited number of intraoperative, tissue assessment techniques available to surgeons, a reduction in second surgeries has been a challenge. We aim to give surgeons additional information at the time of surgery, which we hope will inform their real-time decision making, allowing them to achieve better results and reduce the need for patients to come back for second surgeries.”

Perimeter’s first product – the OTIS™ tissue imaging system – has received United States Food and Drug Administration (FDA) clearance and the company is preparing for a sales launch in 2020. The OTIS™, is an imaging tool which provides high-resolution, real-time imaging of the margin of an excised tissue specimen, enabling clinicians to visualize sub-surface structures up to 2 mm below the surface, while maintaining the integrity of the specimen for post-operative pathology. This is a crucial data set that is currently unavailable to surgeons in real-time.

“You can think of OTIS™ like a photocopier for excised tissue,” says Liz, “but it allows the user to see just inside the specimen. The imaging technique we use is called Optical Coherence Tomography, which is analogous to ultrasound, but uses light instead of sound to produce much higher resolution subsurface images. The product has come a long way since we started the company. We received FDA clearance on an earlier generation of the device in 2016, and just recently (at the start of 2019) received another FDA clearance for an updated model that is 10x faster than the original and includes a novel specimen positioning system. I’m very lucky to work with a team of talented and highly motivated individuals in making this happen.”

After finishing her undergraduate studies at McGill in physics, Liz Munro pursued her Masters of Applied Sciences (MASc) degree in biomedical engineering with Dr. Ofer Levi, graduating in 2009. After an initial stint working with Ontario Centre of Excellence (OCE) on technology innovation projects, Liz started working with a local Toronto startup, Tornado Medical Systems. A project which had been incubated and researched by Tornado was spun out into a new company- Perimeter Medical Imaging, in 2013, and Liz was part of the founding team.

Since then, the company has grown from the original four founders to over 20 people, and has raised more than $21 million from private investors and government agencies.

“I remember when I started at Tornado, I was surprised by how complex their medical device quality management system was.” says Liz. “There were an incredible number of standard operating procedures to learn as part of onboarding, and it was not something that I had been exposed to in the past.”

Adherence to quality standards is a critical aspect of working at a medical device company. Every job function, from administration to engineering to sales must comply with applicable regulatory requirements to ensure that the medical device they design, develop and eventually manufacture, is safe, effective and can be legally sold.

“This has been a huge advantage of hiring staff out of the IBBME MEng (Masters of Engineering) program, as the curriculum includes an introduction to regulatory requirements and quality management systems. We’ve found that individuals coming out of this program tend to “get it” and are quick to learn the ropes of working in a medical device development environment.”

Ellen Turner (IBBME1T7) and Nicole Gauer (IBBME1T7) are two of the IBBME MEng students who have joined Perimeter Medical Imaging after their 4-month internship in 2017.

What do you do in the company?

Ellen: My title is Clinical Engineering and Applications Specialist. I work with the clinical applications team by directly interacting with doctors to train them on how to use our device. I then take their feedback to the engineering team to recommend features and functionality which could improve the device from a clinical perspective. So I have my feet in both worlds.

Nicole: My title is Software Developer which means I work on the software running on the devices – everything ranging from user interface to controlling the hardware. For instance, one thing I’m working on is the ability to transmit images from our device in the operating room to the radiology suite, so that a surgeon can consult a radiologist on image interpretation. That being said, we wear multiple hats in a start up environment.

You mentioned wearing multiple hats, what does that mean?

Nicole: For instance, while my primary focus is software development, I have been in charge of writing verification and validation protocols that wouldn’t necessarily fall within the realm of software, and have acted as support for devices at clinical sites. I think having exposure to these things is invaluable to me.

Ellen: By gaining exposure to areas of the company outside of your specific role, you really start to see how all the roles within the company play into each other and also identify where the focus of the company lies. It gives me perspective on how the whole company runs as a unit.

How did the MEng program prepare you for the job?

Ellen: There’s the internship component where we spent 4 months at the company. There are also extremely useful courses that touch on the regulatory aspect. I remember mentioning this course during the job interview, and the interviewer visibly perked up and got interested. There’s a lot of industry lingo that we got to learn that really put us miles ahead.

Nicole: I’ll have to agree with Ellen, the BME 1800/1801 courses were great first introductions to medical device development. They introduced the sort of documents and regulations you’d need to look at in order to reach commercialization. Even just learning about ISO 13485 and the different FDA and regulatory terminology is a great stepping-stone for getting into industry.   ■