MusiKinesia device could ease therapy for patients with Parkinson’s 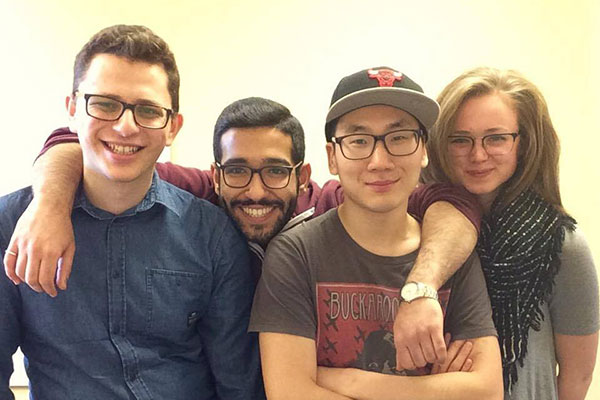 A wearable electronic device created by a team of U of T students could help Parkinson’s patients by providing auditory cues to help them practice certain movements.

The device, called MusiKinesia, was created as part of the BME 498 Capstone Design Course taught by Professor Chris Bouwmeester. In the first semester, teams of students reach out to health professionals to determine what challenges they can then address in the second semester by building a prototype.

“We talked to a number of physiotherapists who specialize in Rhythmic Auditory Stimulation (RAS), which is a form a therapy for patients with Parkinson’s” says McIntosh. “One of them said she wished she could duplicate herself and then go home with all of them to help in between visits. We thought a device could do that.”

Parkinson’s patients experience difficulty controlling their movements; many have resting tremors or can’t complete actions due to neurological damage. RAS appears to help by providing auditory cues to which patients can synchronize their movements.

Physiotherapists who practice RAS use both feed-forward and feedback cues. The feed-forward is usually a simple metronome beat, while the feedback is delivered verbally by the physiotherapists. “It essentially allows patients to use alternate neurological pathways to compensate for the ones that are blocked by Parkinson’s,” says Spichak.

The MusiKinesia aims to replicate RAS cues using the Arduino open-source electronic prototyping platform. It produces an electronic pulse as the feed-forward cue. Feedback is provided by a simple armband that measures the angle of the patient’s arm and translates it into an audible tone. By listening to the pitch, the user can tell how much further they need to move their arm.

McIntosh says that one of the most memorable parts of the project was sitting in on a class at the National Ballet School for patients with Parkinson’s. “When they are dancing, their movements are more fluid, and their tremors are reduced,” she says. “That’s the kind of freedom that we wanted to replicate with our project.”

Both McIntosh and Spichak are planning to continue studying neuroscience at the graduate level, and plan to keep the project going after graduation.

“This experience really solidified my passion for neuroscience, especially Parkinson’s, which I’m going to be studying during my master’s degree,” says McIntosh. “We got to meet so many of the top researchers and practitioners in this area, and working with them and with the patients was really rewarding.”

On July 20, the MusiKinesia team were presented with the U of T Engineering’s John W. Senders Award for Imaginative Design.

Established in 2013 by the Senders family and named after the U of T professor emeritus on the occasion of his 90th birthday, the award recognizes a team of final year undergraduate students who demonstrate an imaginative and successful application of engineering to the design of a medical device capable to restore normal human functions.