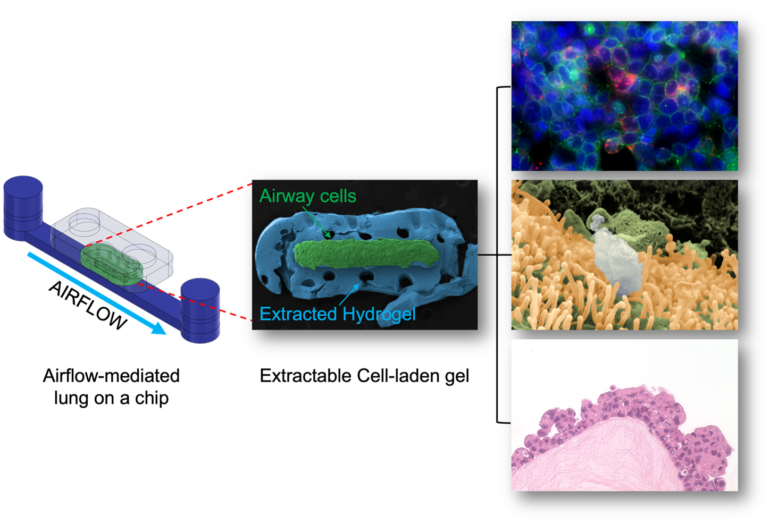 A new technology developed by researchers at the University of Toronto provides the first step in mimicking the environment of lung airways, using a microfluidic device combined with a novel airflow system. This technology enables scientists and engineers to perform various particle exposure experiments to examine the pathological effect of air pollutants on respiratory health.

This development was recently published in the issue of Advanced Materials Technologies by Siwan Park (BME) and Professor Edmond Young (MIE, BME).

The microfluidic lung airway-on-a-chip, as the authors denoted as E-FLOAT (stands for Extractable Floating Liquid gel-based Organ-on-a-chip for Airway Tissue modelling under airflow), is an easily modifiable system where scientists can grow lung cells in a suspended hydrogel that mimics lung tissue. Airflow can also be modulated in this system to simulate breathing in the human lungs.

“We showed that lung airway tissue can be micro-engineered in the lab, exposed to various environmental conditions including airflow and pollutants, and then be extracted for further interrogation as if it were a real lung tissue sample,” said Professor Edmond Young, corresponding author, and Associate Professor at the Institute of Biomedical Engineering and the Department of Mechanical & Industrial Engineering.

In many existing iterations of the technology, cells grown on the microfluidic device are limited to ‘on-chip’ analysis to assess the effect of external stimuli – such as airflow – on the health of the cells. This is suboptimal for analysis. While scientists can remove these cells from the device for post-experimental analysis, this process changes the spatial location of the cells in relationship to the tissue mimicry altogether.

“One of the advantages of E-FLOAT is the ability to extract the biomimetic airway tissue that allows us to develop an in-depth knowledge through a wide array of imaging technologies,” said Siwan Park, the lead researcher on this study and a 5th year Ph.D. candidate at BME, “We were especially excited to obtain the stunning images of histology sections using the extracted hydrogel. Not only does it look beautiful, we believe that it may also be significant in histological and pathological perspectives. Also, depending on how we design the cell-matrix interactions in E-FLOAT, we may obtain a more physiologically accurate representation of multicellular airway tissue.”

The researchers first developed the microfluidic device by micro-milling and bonding the thermoplastic layers. The device incorporates a special channel geometry for growing lung cells on a suspended gel. Lastly, an airflow system was connected to the device that can generate various flow rates of the warm and humidified air.

To put the device to the test, the researchers successfully delivered airborne particles onto the airway cells via controlled airflow to mimic how air pollutants would interact with lung cells.

“In the future, the plan is to use this technology to study the development of lung diseases like asthma – especially in the presence of air pollution – and to also use it as a preclinical model during drug development. There is obviously a lot more work to be done, but we hope to collaborate with lung researchers and partner with pharma down the road to realize this plan,” said Prof. Young.