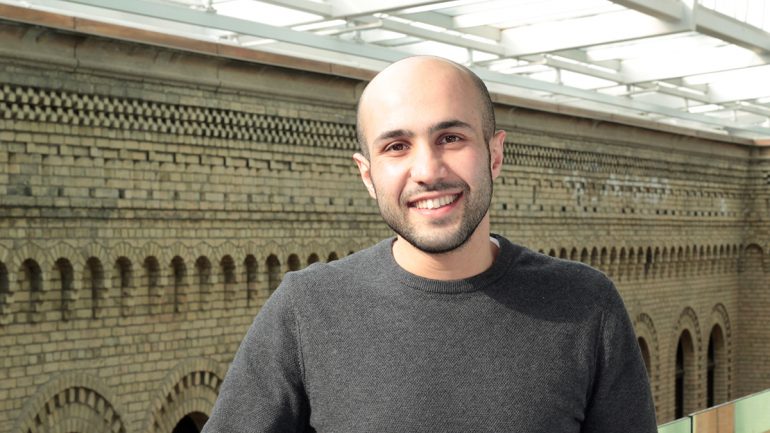 PhD candidate Moshen Afshar is one of two IBBME students to receive a 2018 Jennifer Dorrington Doctoral Research Award. He is growing muscle and nerve tissue together to study the meeting point between the two in Professor Penney Gilbert's lab
Share

During exercise, most people don’t ponder about chemical processes playing out in their muscles, yet that’s all Mohsen Afshar can think about. A tissue engineering researcher and tennis enthusiast, Afshar grows mini muscles in the dish that allow him to study how muscles form and work at a level of detail previously impossible.

Afshar is one of two IBBME students to receive this year’s Jennifer Dorrington Doctoral Research Award, awarded annually to outstanding graduate students conducting research in the University of Toronto’s Donnelly Centre. Established in 2006, the award pays tribute to Dr. Jennifer Dorrington, who was a professor in the Banting and Best Department of Medical Research. Dorrington’s pioneering research greatly advanced our understanding of reproductive biology and ovarian cancer.

Working in Professor Penney Gilbert‘s lab, Afshar grows tiny muscles no larger than a pencil tip, but they twitch just like real muscles do.

“Using the right biomaterials and extracellular matrix proteins, we can now grow human skeletal muscle in a dish in a way that mimics muscles in the body and how they respond to stimuli,” says Afshar. The new tissue platform allows the team to study in exquisite detail how muscles that help us move form and work.

It took Afshar a lot of work to get to this point. He gets scraps of adult muscle tissue from biopsies taken during surgery by Gilbert’s clinical collaborators at the nearby St. Michael’s Hospital. To watch muscle fibers form from scratch, Afshar first had to isolate muscle stem cells from the donated tissue and then, using molecular tricks, coax these cells to grow into elongated muscle cells that eventually come together to form contractile fibers. The whole process takes about a fortnight.

“It’s all very well to have a tissue model, but it’s what you do with it that counts,” says Afshar. “That’s what’s great about Penney’s lab. She always pushes us to think about how we can use our model to learn more about the science.”

One research avenue Afshar is pursuing is to figure out how nerves interlace with muscles to form the neuromuscular junction (NMJ) through which electrical impulses flow and tell the muscle to contract. Thanks to his mini muscles, he can now study this process for the first time in a three-dimensional space, similar to how it occurs in the body.

To do this, Ashfar grows muscle fibers alongside stem cell-derived nerve cells, which then self-organize into the NMJ within a custom-made 3D scaffold.

Another advantage of Ashfar’s complex tissue platform is that it is more similar to the adult NMJ than any other available models, which more closely resemble the immature NMJ in the embryo. This means that the team can now use the platform to study in a dish neuromuscular diseases such as myasthenia gravis or amyotrophic lateral sclerosis (ALS), which cause, respectively, weakness of skeletal muscles and the death of neurons controlling them, as they appear in real life.

Afshar says his research would not have been possible without support from colleagues in the lab and across the Donnelly Centre. “Ever since I started here, people have been so welcoming and collaborative,” he says. “I got a lot of help from Professor Peter Zandstra’s lab when I first started setting up the tissue culture platform. And [Donnelly Centre’s] Professor Jason Moffat‘s lab helped me overcome hurdles when working with viruses used to deliver genes to cultured muscle cells.”

The second IBBME recipient of this year’s Dorrington Award is Alexander Vlahos. His goal is to develop better transplantation methods for the treatment of diabetes. The decision to take on the project was partly personal, he said.

“My father has type 2 diabetes and my grandfather died of pancreatic cancer so maybe there is subconsciously some gravitation towards looking at the pancreas,” says Vlahos.

But he was also in the right place at the right time— five years ago, he joined University Professor Michael Sefton’s lab as a PhD candidate. The team already had a long expertise in using bioengineering approaches to boost blood vessel growth in the body. This would turn out to be critical for Vlahos’ success in showing that type 1 diabetes (T1D), in which the body is unable to produce insulin, can be treated— in mice at least— by transplanting the insulin-producing cells, sourced from the pancreas of a healthy donor, right beneath the skin. The findings were published last year in the Proceedings of the National Academy of Sciences (PNAS).

If the procedure could be applied to people, it would be far less invasive than the current gold standard method in which pancreatic cells are transplanted into the patient’s liver.

“Our approach also has the advantage of being retrievable— in case something were to go wrong, the cells could be easily removed,” says Vlahos.

Vlahos is now working to improve the underneath-the-skin transplantation method so that it requires fewer pancreatic cells, which are hard to come by.

For the graft to take, the transplant site needs to be rich in blood vessels so they can support the survival of pancreatic cells. The space underneath the skin is poorly vascularized, however, and this presented a main obstacle to transplantation. Vlahos was able to clear this hurdle by co-implanting with pancreatic cells, collagen rods and cells that line the blood vessels which spurred the growth of capillaries around the graft, boosting its survival.

He is now exploring a related approach in which he vascularizes the transplant site before implanting the pancreatic cells. His other project involves developing a new technology for engineering insulin-producing microtissues. Both of these approaches focus on reducing the number of donated pancreatic cells required to have a therapeutic effect, thereby increasing the efficacy of these rare cells.

Vlahos’ success has taken the lab on a new path. When he started his PhD, Vlahos was the only person on the team working on the project. Thanks to his data, the lab has secured a $1.1M in funding from the JDRF, a leading world organization focusing on T1D research, and there are now five students working on transplanting pancreatic islets underneath the skin.

After his PhD, Vlahos wants to get postdoctoral training in order to become an independent investigator. He believes the Dorrington Award will help him reach this goal. “Looking at the past students who had won this award, they are doing very successful things,” says Vlahos. “I am humbled to be considered part of that group.”

“The award was highly competitive this year as we had 50 per cent more applicants than usual,” says Professor Gary Bader, Chair of the award committee that included Professors Liliana Attisano, Henry Krause and Cindi Morshead as members. All are principal Investigators in the Donnelly Centre. “These excellent students are highly deserving of the Jennifer Dorrington Award for having made important contributions to their respective fields of research, and I have no doubt that ahead of them lies a bright future as independent investigators.”

—A version of this story originally appeared on U of T Donnelly Centre news.