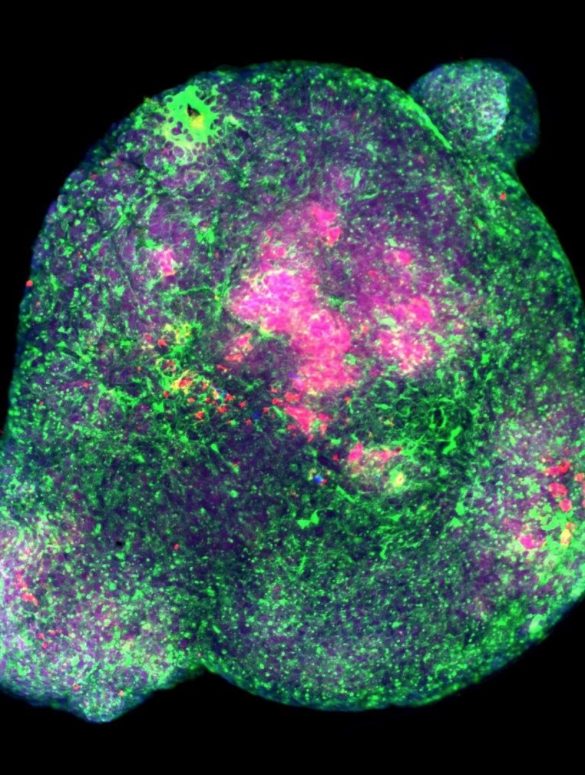 Julien is a third year Engineering Science student. He spent 4 months at Massachusetts Institute of Technology.

During the summer of 2018, I worked at the Massachusetts Institute of Technology (MIT) in Dr. Kwanghun Chung’s laboratory. I joined the lab because of its expertise in the field of tissue clearing and brain imaging. As a student in biomedical engineering, I’m interested in learning more about the novel techniques used to screen and treat brain disorders.

I conducted research under the supervision of Dr. Alexandre Albanese (IBBME PhD 1T4), a postdoctoral fellow interested in characterizing the phenotype of cell populations in cerebral organoids (mini brains) using three-dimensional (3D) whole-tissue imaging. In short, if there is something wrong with your brain, we can grow organoids with your DNA to study your neurons’ behavior.

Human brains are highly vascularized, with more than 100,000 kilometers of blood delivering oxygen and nutrients to keep the cells alive. Mini-brains, however, lack a vasculature. To address this fundamental limitation of the in vitro brain model, the Chung Lab is printing synthetic microvasculature to perfuse organoids.

My summer project consisted of culturing endothelial cells on the luminal (inside) surface of the microvasculature. The objective was to improve the biological accuracy of the in vitro model by introducing a platform to facilitate cell co-culture. Some of my achievements include the development of a cell culture protocol on the vasculature, and design improvements to enhance its biological applications. In the future, this biomaterial could be used for other organoid models and implants. My independent summer project was a great opportunity to apply the skills learned in Biomedical Engineering Systems Option in Engineering Science such as fluid mechanics (AER210), cell culture (BME205) and rapid prototyping (AER201). This summer was also an occasion to learn new skills; I learned sterilization techniques used to clean an incubator infested with fungi, I designed and fabricated scaffolds using 3D printed molds, and I became interested in computational image analysis using machine learning.

It was a great privilege to be part of MIT, a community which was both scientifically and artistically stimulating. Though my stem cells required daily love and attention, I managed to escape to the beach on weekends, run along the Charles River at night, and attend a concert on a boat. I want to extend my thanks to the Division of Engineering Science for helping me fund this opportunity, as well as all the members of the Chung Lab for a memorable summer.